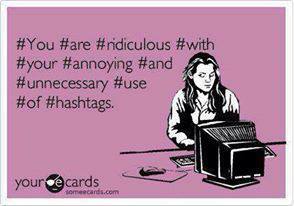 Some people are still quite confused as to what hashtags are. Hashtags are that word you see after the number sign people place after their Facebook statuses, Google Plus and Instagram posts and Twitter tweets. The purpose of the hashtag is that if someone clicks on it, other conversations that contain the hashtag will come up. For instance, if someone put up a Facebook status that was similar to what you had put up, and placed the same hashtag that you had- someone could click on that individual’s hashtag and your status update could come up along with some others who share the same hashtag. You get more exposure with hashtags.

In regards to Twitter, it is important to hashtag your tweets with the relevant keyword because if someone does a search on Twitter for the keyword you had used, your tweet will come up- and that means more exposure for you! So hashtags are quite useful. However, unfortunately a lot of people do not use hashtags wisely and I will talk about five common mistakes many people make with hashtags.

1. Using Too Many Hashtags– All people want is their tweets or posts being seen. Of course, or else why would we be using social media? However many people get carried away by using 5 or 10 hashtags with their posts/tweets which can not only appear spammy however it can be confusing. It is going to end up turning people off and your tweets and posts will be ignored. It is best to use 2-3 hashtags, I would say more like 2. That is more than enough.

2. Using Sentences– It is okay to use short phrases (3 words maximum) as hashtags, however some people go all out and create really long hashtags that should be really be left as a sentence. For instance if you are tweeting or posting an Einstein quote, it is okay to hashtag #Einsteinquote however do not so something like #anotheramazingeinsteinquote. No one will find it nor will anyone care.

3. Not Relevant– It is bad enough when people use very long hashtags or too many of them, however once they start adding hashtags that are not relevant to the tweet or post, that is a big turn off. Not only how will that helpful. If you are tweeting about a sunny destination, don’t use #ice as a hashtag in the tweet. How is that going to help?

4. Highjacking– This is something that happens with tweet chats often. Many people highjack hashtags used within the tweet chat and start tweeting tweets that are not relevant to the chat. This behavior can get your account suspended. The best advice is to not do it. If you want to host a chat with your own branded hashtag, you can to do through Twubs, that is a lot safer than to highjacking.

5. Creativity is Great to a Point– Do not make up your own hashtags unless you see existing hashtags you have in mind and the posts with it are not irrelevant to what you want to put out. If you start making up hashtags that will not serve you other than the fact it may look like a way to express your creativity, that is going to hurt you in the long run. Express your creativity through your tweets and posts, however not through your use of hashtags.

Make sure you use 2-3 maximum relevant hashtags with your posts on a consistent basis and you will improve your online visibility, as well as engagement and networking.