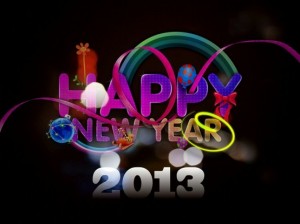 Wow. I can’t believe that 2012 is just about over (and no the world did not end a week ago lol). It almost seems like the other day that the year just started. Looking at it now, you can see that it just flew by. But was it really different from any other year? I really don’t know if it was in the overall picture. Like in previous years, there were triumphs that occurred like Prince William and Princess Kate announcing that they are expecting their first child (even though the announcement was forced based on Kate’s condition), and sadly disasters happened like the school shooting in Newtown a few weeks back. That was the absolute worst part of the year and I am still very shaken up by it, and will be for a while.

However, I must say for me it was a very productive year. I had turned a different direction business/career wise and for the better. The more I think about it, it changed me as a whole. I mean I had been dabbling in the work at home niche for plenty of years without a lot of success. That is the same story of any internet marketer that has not quite gotten “it” yet. Aside from that, over the last few years I put my heart and soul into the metaphysical niche. If you don’t mind I am going to talk about my experiences that happened prior to 2012 because it is relevant to how things this year changed for me.

I have always had an interest in metaphysics, became a certified astrologer in 2006, wrote my first esoteric book in 2009 and my second in 2011. They both were on spirituality and reincarnation. Even though I delved into metaphysics and certainly was (and still am) very interested in it, I was not overly happy and passionate about having a “career” in that field- not as my main focus anyway. I felt I was just too “negative” to be a “spiritual” person and felt like a complete hypocrite by teaching others about spirituality in my state of mind which was not good at the time.

I am also going to be honest. My first two books did not do that well in sales. I figured that it happened because I did not market it well and the niche was too narrow. Yes, those were factors but I just did not enjoy what I was doing and that was the biggest reason the books did not do well. I also had many negative experiences with a lot of people in the spiritual communities. I was just down about the whole thing in general! At the same time I was studying SEO and social media and felt more compelled to stick with those fields and other internet marketing fields instead of the metaphysical niche. However, I almost felt bad about doing that because I had worked so hard on writing these books and did not think I “should” work in both areas. Thinking back on it, it was very irrational. If I really cared about those books selling, I would applied what I had learned about internet marketing with it. But I chose not to.

But it got to a point which after my second book was released and did not sell as well as I had hoped, I got fed up and decided to create my own online company, Gemini Rising Ltd (had to throw the astrology part of me in there since Gemini rules communication and that is what the internet is based on) that initially mostly offered SEO services which was back in 2011. I did better with that than I did with the books, that was for certain. And the more I got involved with my company, the less I cared doing astrology readings and anything to do with the books. But I still felt guilty about it which put a damper on every part of me. Very silly but I had not learned otherwise then.

In fact I was designing a past life astrology course just to stick to the field because I felt I “should” but never knew how I was going to release it. I started creating it in the fall of 2011 and kept saying at the time it would be released in January of this year. Not to mention I had no idea how I was going to release it! Was it going to be a video course? Or an email course? I had no idea. Of course January came and nothing. In fact at that time I was feeling somewhat lost.

However, everything for me changed for me in the later part of the spring when I was invited to try out Klout. Something about it just triggered that fire within me and from that moment onward, I knew it was time for me to not just delve further into social media and internet marketing but to master it. Why? I don’t know but something about it just drove up my passion in social media, Klout and everything related.

I learned what there is to learn about it (and still always learning) and I have been teaching others about it as well and I just love it. The majority of business I am doing is social media related now. I love the community unlike how I felt about a lot of those in the spiritual community (except for those who I felt were down to Earth and I have maintained some great friendships with those particular people). I am a lot more successful with it than I have been with anything else I have done. I have big plans in regards to my social media work for the upcoming year, and yes I know how to execute it. My vision for it is huge.

What happened to me in 2012? I found my true passion. I learned to go with it. I found out what passion really is. I discovered that fire. It literally turned a better leaf for me. I also became a believer in the Law of Attraction which I did doubt for a long time. But I know it works and like I said before, I have big plans for my work, big visions and feel the success that is coming out of it already.

As I say good-bye to 2012, I am ready to welcome 2013 with open arms. I am determined to make 2013 another life changing year for the better. I have at least five goals for that year I am seeing myself already achieve. I am not going to say right now as to what they are (and no it has nothing to do with me “fearing if I speak too soon, it will ruin it” but there are some things that I simply do not want to be public knowledge as of yet) however, mark my words. I will be remembering this blog post in a year from now. In fact, I will be writing a “continuation” of this, if you will. Let’s say I will write this on December 29, 2013. I will be telling you those goals that I would have achieved. Yes, they all will be out in the open by then. It already feels great.

However, I still enjoy astrology and anything to do with esoteric studies. I occasionally do readings on the side, but more so as a hobby and not really as a business. I do reference those books I have written in my list of accomplishments because I still wrote them regardless of what my mindset was at the time. But in 2012 I discovered what I am meant to really do. I found out what I am truly passionate about. I just learned a lot in general. And will I ever release that past life astrology course? Maybe. But not right now. I have other priorities. I am ready to say good bye to 2012 and welcome 2013 with open arms. I am ready to get what I want for that year! How about you?