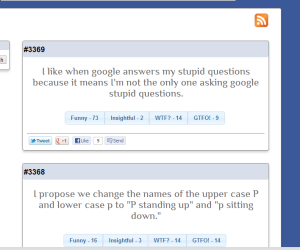 Yes that is right. If you write up status updates that are off the wall, be prepared to know that they will never disappear and will be floating around cyberspace forever. And whatever wacky status update you write up will be associated with you for good. Unless you do not care about idea, you will want to think twice before saying something that could tarnish your reputation for life. Especially if you are working on building your professional image and want to network. The site where you can get a hold of these crazy updates is called Post Randomonium.

I realize that some of these people who post these types of updates probably are not overly concerned about serious networking. However, regardless their reputation could easily be affected by these. Here is a reminder of what types of updates to never post on Facebook, Twitter or any social network-

1. Keep Negativity at Bay– Having a bad day? We all have those and no one is saying it is realistic to be Ms or Mr. Merry Sunshine 24/7. However, if you have a strong need to vent, do not do so on any of your social networks. Call someone or get a private journal for that purpose. Whatever you say will stick with you for good. Even if you were to delete it. Some people will remember what you say before doing so.

2. If you Have Had too Much to Drink, Stay Away from Social Media– I have a confession to make. New Years Eve of 2010 I was more than just a little tipsy. I admit it. I posted some eccentric status updates on Facebook, and thankfully they were not so bad to the point where people would have really remembered what I had said. Nothing I said was really “out of this world” and frankly I was pretty lucky. However, not everyone who has had too much to drink, posting status updates on their social media profiles would be so “tame” in that condition. If you are a professional attempting to build your image, and you had a lot to drink one night- then you suddenly post something very embarrassing on Facebook while you are in that kind of condition could potentially have a negative effect on your reputation later on. If you plan on having a few drinks, keep away from social media if you want to protect yourself.

3. Never Curse– It is amazing how many people swear and curse on social media. I am not talking about teenagers doing so. That behavior is expected from them. I am talking about professionals who are looking to network. Cursing and swearing does not give you a good quality image and makes you look, dare I say cheap! If you are going to post an update on Facebook or Twitter, keep it clean.

4. Never Get into Anything Personal– If you are having personal issues, keep it off of your social networks. If you are in the middle of filing for bankruptcy, going through a divorce process, or dealing with anything else that you really would not want the world to know- keep it off of your social networks. I understand people need support while going through any of that. You can use email, the phone, a private blog that only a few friends of yours could view, a forum to talk about those issues while you are using an alias for that. However, if you do not want anyone associating the issue you are going through with your name, do not say a thing about it publicly on your social networks. Unfortunately there are some cruel people out there who can make life worse for you if they know as well. When it is okay to talk about any of that is if it was a past issue and you found a way to overcome it for the purpose of inspiring others. However, do not talk about it out in the open while it is so raw in your life.

If you have other tips to give, feel free! Keep your updates clean, and chances are you will be okay and nothing that you say will end up on Post Randomonium.

And by the way there is another cool site that delivers great FB statuses as well called Facebook status of the day. Check it out and look below to see what the FBS of the day may be!