Spreading the Influence with Andrew Brewer 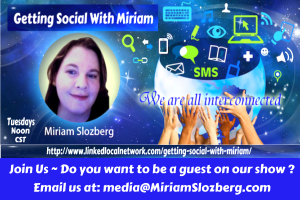 Today on Getting Social with Miriam, I had the pleasure of interviewing I am very excited about interviewing ?The Rock n Roll Psychic?, or Andrew Brewer. Andrew is nationally televised clairvoyant, astrologer, and “remote viewer” who is a also a specialist in the integration of intuition and business.

Over a ten year six figure plus career, Andrew managed projects for several Fortune 500 companies and was twice selected for inclusion in ?Who?s Who of Executives and Professionals?.

Andrew has hundreds of appearances to his credit on both radio and television, perhaps most notably as the featured psychic and co-host, along with Erik Estrada (?Chips?) and Jenilee Harrison (?Three?s Company”), of ?Kebrina?s Psychic Answer?,which aired throughout the United States and Canada from 1992-94.

He is the creator of 3 decks including the “Khar – Ma: Past Lives Divination Deck” and “The Tarot of Hungarian Shadows”; in addition to being the author of 10 books, including “The Metaphoric Mirror”, “Hymn to the Manichean”, “The Alchemy of Love”, “The Rock n Roll Psychic’s Guide to Life”, and “Cognitive Dissonance and the Blowback Economy”.

Andrew was the resident morning psychic for many years on Magic 99.7 FM?Columbus? leading Rock station?and was also featured in a segment on ?PM Magazine?. He has also appeared in several Hollywood films and music videos as an actor.

A talented writer, Andrew has published articles on a wide variety of metaphysical topics. He was at one time a featured columnist in ?The Free Press? and has been featured, and quoted, in front page articles in both ?The Los Angeles Times? and ?USA Today?.

Labeled ?The Rock n Roll Psychic? due to his many clients in the music industry, Andrew has advised major players from Hollywood to Wall Street and his client list, both past and present, includes Actors and Directors, Recording Stars (from L.A. to Nashville, San Francisco to Berlin) and business executives, internationally known super-models, NFL Cheerleaders and professional athletes in both the NFL and the NBA.