Why Do You Care About Having a High Klout Score Anyway?

What Having a High Klout Score Means to You

I know I have been talking a lot about Klout latey. But get used to it as this is just the beginning. Wait until my products about Klout are available and will be very soon as I am actually wrapping them up now. Just a few finishing touches I need to do with them but necessary ones. Oh and by the way, the issue with Klout has been resolved (yeah they totally messed up as their Facebook connector was not picking up stats properly) and my score is back to 76 which I am pleased about.

Anyway I have to say that Klout is one of those things that people either love or hate. But regardless, they are also very curious about it and care about it- yes, even the haters do. If they did not care they would not put in so much effort to bash it like they do. Many haters just simply don’t understand it and don’t care to understand it. They just want to judge it. And there are also many haters who secretly wish they could get a high score but have not been able to do so successfully. So it is easier to hate instead. Reminds me of many of those who bash the iPhone 5 without knowing much about it. Many bash it because they secretly wish they could have one but cannot afford it. It’s all the same thing. But regardless of whether you love Klout or hate it (but wish deep down you knew how to get a high score), why do you care about having a high score?

I do have a Fiverr gig for the purpose of helping people increase their scores (though what I do for this gig will help people raise their scores minimally unless their scores are very low). Can’t expect too much from spending just five bucks! 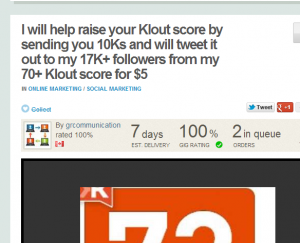 I have had a number of orders for this particular gig already. Someone who had ordered this gig previously just ordered it again for his sister as he explained she is looking for a job and having a high Klout score is a necessity in her case. I have already discussed many times that if you are applying for a marketing, social media, SEO, PR or any job where you have to deal with the public professionally- it is in your best interest to have a high Klout score because proper use of social media is important in those fields. If anything will indicate how well you engage with others via social media, Klout as well as other measuring systems will.

I have to say I was actually very happy when the buyer explained to me that he had ordered a gig to help his sister increase her score for the purpose of her having a better chance at getting a job. This means he and his sister understand one important aspect of Klout. I mean not that I go around and ask every person who buys that particular gig why they care about having a high Klout score. Those who are working towards increasing the score have their own agendas. Some are reasonable such as wanting to have an increased chance of being hired or just plain more influential in their fields. But there are some out there who want a high Klout score for the wrong reasons.

I have no right to judge anyone’s reasons as to why he or she would want a high Klout score. But I have to say it bugs me to no end when someone wants a high score for the sole purpose of boosting up his or her ego. Sadly, there are so many people out there who want to do so in order to brag about it. These people who are concerned about having a great number just for the sake of it are not at all concerned about finding employment opportunities, being invited to speak at seminars, or just being influential in a particular field. They just want something to brag about. And I have seen those who ended up with big numbers just for the sake of going on an ego trip. They become “elitists”, snub those especially who have lower scores, and become downright obnoxious. I am sorry to say that if you are looking to increase your numbers for that reason alone, then don’t bother. It will just make you appear disturbingly arrogant and you will be disliked by many. Not to mention, Klout’s intention is not to boost up anyone’s ego. Don’t make it appear that way.

If you are so concerned about having a high score, then think about why. Again don’t do it for the sake of your ego. Having a high score will be helpful in many ways but it is not for the purpose of determining your “worth”.

And by the way, if you are thinking to yourself why I care about having a high Klout score- I have my reasons and it has nothing to do with boosting my ego! If it did, I would not be passionate about helping others do the same!