The New Klout is Out 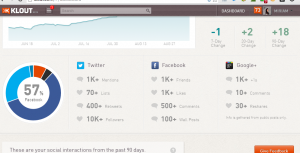 If you Pay Attention to Klout, You Likely Know About This Already

For those who have been monitoring their Klout scores, you were likely anxious to see Klout’s new layout. And for those who were able to refer 10 Facebook friends to Klout got a sneak preview of it. Lucky me, I was fortunate enough to do that so I knew what it looked like for a while anyway. So they updated their layout today and are updating many, many things and are trying to improve it. But lots of bugs get into the way while that happens. That goes for anything that is evolving when you think about it.

Klout used to measure your network, amplification (retweets and such) and reach. Now it takes moments from your social media sites such as specific tweets that were retweeted, Facebook statuses that were liked, commented on and/or shared, and G+ statuses that were +1’ed, shared and/or commented on and call them moments. These moments are also rated based on how influential they are. So this is what Klout is doing now.

I like Klout and I happen to see a lot of value in it. I know there are plenty of those who hate it but they just don’t understand what it is about. However I am creating a course in Klout and hope to have it released in October sometime but I will say I am having a bit of a beef with them right now.

Again I totally understand while going through such changes bugs will get into the way. But over the last week all of a sudden my Facebook statuses and shares were missing from Klout’s platform. Most of my activity is through Facebook and none of it has been documented. And the reason I know this is because I have previewed the new layout before it launched and when it officially launched it still was not there. I had a score of 75, and now because of this, it went back down to 73 and it keeps creeping down. I have contacted them for a while now and they just don’t bother responding. I realize they may be busy and perhaps others are dealing with the same thing. I know a lot of people’s scores have been dipping too, but they promise to get back to you in 1-3 days but its been past 3 days since I inquired about this. I am getting pissed.

But what I did try to do was unlink my Facebook profile and relink it. Sometimes a bit of a reboot like that is enough to get things on the right track again.

Anyway if you monitor your score on Klout, I am interested in hearing your thoughts in this.