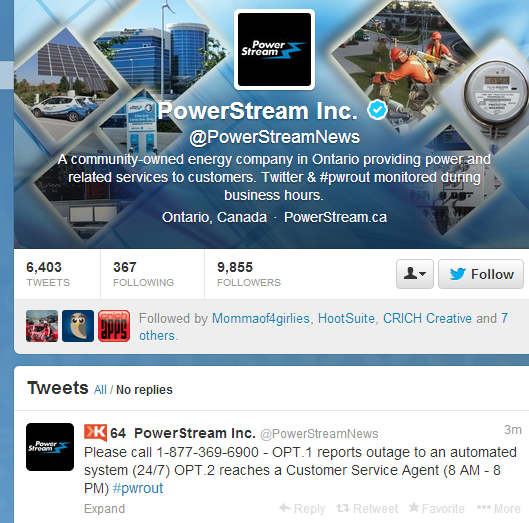 Last weekend an ice storm hit the Toronto area and many residents there and in the surrounding areas were without power. And 5 days later, there are still a lot of people who have no power. I was fortunate enough to have my power restored about 3 days after the outage occurred and during that time, me and my family stayed at a hotel- that of course had electricity.

In the past, if there were disasters that caused wide spread power outages such as this ice storm, people would have had to rely on calling the hydro company for updates. Which by the way would have not been helpful due to the fact that lines would have been overloaded. That also depends on whether the phone lines would have gone down as well with the power, assuming that mobile phones were not in the picture. Meaning, they would have either stayed in their homes with no power, being either very cold if the outage had happened during the winter, or very hot if it happened during the summer- and would have had no option other than to stick it out, hoping and praying that the power would come back quickly without having any idea of progress that the hydro company would have made in their areas to restore electricity.

The fortunate thing now, with social media and mobile technology in the picture, affected people would have a much better idea of how many others were affected by the outage, what kind of progress the hydro company has made to restore their power- and have a way to be in touch with family and friends for updates as well.

On Sunday, I may have not been able to make calls from my land line since my phones operate on electricity, nor was I able to turn on my computer. However, I had my mobile phone working, and I immediately went on the Twitter profile of the hydro company for updates. It appeared that based on the damage that happened, it was going to be several days before getting power back. Knowing that, I knew I had a choice to find somewhere to stay that had electricity. The hydro company tweeted out as well that there were local community centres that operated on generators that were offering a place for residents to stay. However, I found a pet friendly hotel that had power, and took the family there to stay until the electricity at home had been restored.

During the time I stayed at the hotel, I frequently visited the Twitter feed for progress updates. At times they tweeted out that it was best to call the hydro company hotline for reporting other outages and to keep tabs on updates. However, the majority of affected people were following the their Twitter updates and they were communicating with others affected.

At times like this, social media and mobile technology is a blessing. Instead of sitting in a frigid home, shivering and wondering when or if the power will ever return- you will at least know of the progress that has been made when it comes to restoring electricity in your area by following the hydro company’s social media updates. You will also be aware of the fact that many local community centres that were either unaffected or were operating on generators offered residents a place to stay. That in itself will help remove a lot of the stress, because you will be aware of options you can use during the time, and you will more or less know where you stand.

Social media is not only essential for you to utilize for your business, however it is a necessary tool to use when it comes to relying on information you will need when it comes to power outages, or any kind of other disaster you could face- along with mobile technology.