Lots of Thumbs Down for Klout

There are Klout Lovers But Plenty of Haters too 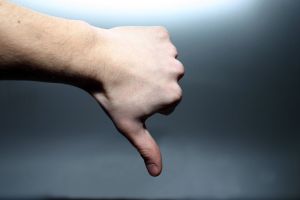 Over the last several months especially, there has been a lot of heated debates in regards to Klout, the tool that measures your online presence and influence. Klout has been going through many changes and are slowly trying to improve their system but when changes are being made, many kinks need to be ironed out. As a result, Klout has been bashed and criticized by many, and I have to say unfairly.

The fact of the matter is, even if Klout was not undergoing so many changes, there are plenty of people out there anyway who just give it a complete thumbs down. You will have haters, lovers, and those who are curious and want to learn more about it.

Whenever there is so much hate for something or someone, there is always fear behind it. The harshest criticism I have seen in regards to Klout is how “ridiculous it is that employers are looking at Klout scores of applicants”. Or “Klout is an elitist club and it is only there to boost your ego and nothing else”. Or “it has no idea how to measure real influence since most of the influential people around are too old to even know anything about social media”.

OK fine. Some of these criticisms are valid but to a degree.

The fact of the matter is, a lot of people resent Klout because they also know this is the new reality. Social media is a significant part of most people’s life nowadays and it will just keep becoming more intense in time. The way you are online will spill over to the offline world and if you are known to make a positive impact on others, and you are a great networker, then it will reflect well on your Klout score. Again a lot of people hate this.

So here is a suggestion to those who fall into that category. If you hate Klout so much, then just forget about it. If your line of work does not involve any of the above I had described, then don’t bother using social media except for keeping in touch with your friends and family. This way you don’t need to worry about Klout and it is as simple as that.

Now with the second complaint about “Klout being an elitist club”, that is also not necessarily true. For some, yes. Having a high Klout score can be a danger to someone’s ego but so is having a lot of money and not every financially well off individual is egotistical. And certainly not every user who has a high Klout score is either. In fact many users who have high scores are social media specialists who want to help others achieve the same. So anyone who says that Klout is an elitist club should not ever generalize. Stereotyping is a no-no.

Alright, now to the criticism “Klout has no idea how to measure real influence since most of the influential people around are too old to even know anything about social media”. OK some of this is true. And we are still influenced by people who are long gone as well. But when we are talking about influence, we are talking about those who are known to have an online presence. This is the norm now. People need to accept this. At one time influential people were written about in books and in newspapers all of the time. They still may be but what is done online is what people care about now. The other stuff is becoming obsolete.

And yes, Klout may not be perfect. It has a lot of imperfections and it may not be 100{a0065375a7e2d1c093abc1aba7894b1ad713a40df7f413d8a34d916c8e570350} accurate in regards to measuring your true online influence as it needs to pick up stats from personal blogs and such much better than they do now. It is changing all of the time and is improving all of the time. But one day I predict it will be as accurate as it possibly can be.

Oh and the last criticism that I almost forgot to add was that “Klout should not be compared to a credit score”. Umm yes actually it should. Lenders will not grant you a loan if you have a poor credit score and are not paying your bills on time, and have had collection agencies after you- or if you have filed for bankruptcy. Why should you get a job in certain fields that require you to have a positive online presence and that requires you to be a great networker? So yes. Klout counts. It is very important and people need to get used to this new reality. It is not going anywhere.