Klout is Going Through Some Serious Growing Pains

Klout Has Kinks to Work Out

Klout is expanding and it’s objective is to get better and better at calculating online influence more accurately than it ever has. It is about time they did and they recently gave members an option to add their Facebook Fan Pages to the system so the activity could be tracked and have a more accurate impact on their scores. Well this is good news for those who have more active Facebook Fan Pages than their profiles. However, whenever something is expanding it will suffer from growing pains. It is inevitable.

Since they added this useful feature, problems with tracking activities from many user’s Facebook profiles arose again. Some users got lucky but I didn’t. Last week my score was sitting pretty at 76 and it was for the last month. My score fell a whole point and a quarter on Friday despite of the fact that I am quite active on my profiles (I need to improve my activity on Google Plus).

Even though I knew why the score had dropped, I still was not happy. But it did not take a rocket scientist to figure out why. 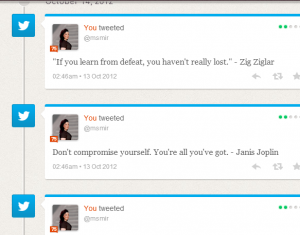 None of my moments from Facebook or Google Plus even were being documented. Just Twitter. I am very active on Twitter but more so on Facebook. I immediately un-linked and re-linked my Facebook and Google Plus to Klout but not sure if that would help this time. I may have to do it again because it is difficult to say if the problem on their end has been fixed yet. I have noticed on Klout’s Facebook Fan page that users were bombarding them with complaints for the same reason (rightfully so because something like this cannot be neglected). They all said their scores have been dropping for this reason. Klout is aware of this AND is attempting to get this settled. However, who knows how long it will take them to take care of this issue.

But I have to say, even though I think Klout is currently badly disorganized and needs to come up with better plans when issues like this arise as they expand- I see the potential in it. One day it will track people’s online activity a lot more accurately with little issues coming up. Klout is very important because it tracks your online activity and influence as well as it can even though it still may not be 100{a0065375a7e2d1c093abc1aba7894b1ad713a40df7f413d8a34d916c8e570350} accurate. How you behave online is a strong indicator of how you behave offline.

I mean if you are looking for a job in the marketing field or in a field where you have to deal with the public professionally, your Klout score will be an indicator of how influential you really are online. After their big platform update in August, your online activities are seen on your Klout profile from anyone looking at it. Employers in those fields are looking for applicants with high scores in conjunction with relevant experience. A lot of people have a serious problem with this fact but it is not going away. On the contrary! This is becoming more and more common. Other scoring platforms such as Kred and TrustCloud are also becoming increasingly popular. Get used to it people! Klout is not going away whether you like it or not.