It Finally Happened- Someone Had Actually Hosted a Klout Party 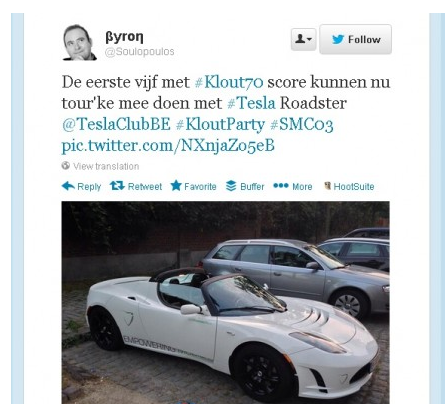 Here is a fun post that I thought I would add for tonight. On August 27, in Antwerp, Belgium, someone with the name of Ransbottyn Cain decided to do something interesting. Cain had hosted a Klout party. How did this party work? Well this is how Cain had organized this party. Anyone with a score of 40 was only allowed to drink beer. However, anyone with a score of over 70 had the champagne, lobster appetizers, oysters and sushi. And from what I understand if you were in the high 70’s you would get a limo ride. Too bad that someone who had been invited with a score of 81 was not able to attend because he had missed a helicopter ride.

The party sounded definitely- different, and I have to say hearing about this does not in the least bit surprise me. I would not be at all surprised if more and more “Klout parties” started to pop up since Klout is becoming not just more known however more mainstream. I am sure a lot of people would be shaking their heads at this. I bet a lot of people would find it ridiculous that someone with a score of 40 would be denied limo rides and champagne all because they are a ways off from having a score of over 70. Hopefully this was noted in the invitation, and those who were invited fully understood what the Klout score was. Because, if it is a Klout party, then it would make sense that the higher the score someone has, the better the treats they would receive. Not to mention, for those who were invited and understood the purpose did not have to come if they did not like the idea!

To read more up on this story, click here and be sure to click on translate unless you speak Dutch.