Is Your Klout Score Consistently Dropping? Here is an Explanation 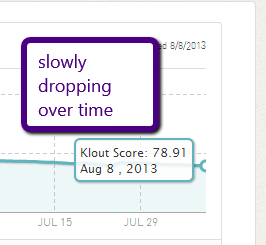 Even though I had recently written about not getting overly obsessed with your Klout score, it is still recommended to keep tabs on it to monitor how well you are doing with your online activities. I also must say that I have been noticing a lot of scores dropping, mine included very slowly- and it has nothing to do with being less active or anything wrong with the system. It is quite apparent that Klout is becoming stricter and stricter on how it scores your activities. People who are blatantly gaming the system are starting to get penalized, however if you have a large network and you do not interact with many of them- you will be penalized for that as well. That is something that very few of us have considered and may even sound counter-intuitive if a large network you have may be responsible for your sliding score. However, if your network is growing and if you are interacting with the same amount of people on an ongoing basis- regardless of how high some of their scores may be, this is going to hurt you in the long run.

A friend of mine had just told me today, after his score had slid, he had cleaned up his non-interactive connections on Facebook and just from doing that, his score did increase somewhat today. After he had said that, I started doing the same. While in the process, I have noticed that I have many connections who I don’t even know or who I may have even really met.

Aside from the impact it has on your score, why keep connections that you are not going to really interact with? All they do is take up space. At the same time, before removing each connection, decide if there is any benefit you would get if you were to keep the connection. If so, then start interacting with that particular individual. If he or she becomes interactive with you, then you would have been right to keep the connection. However, if there does not seem to be any interest on his or her end to engage with you, then delete. Make room for new connections that you will be interacting with. And you will want to repeat this process every 3 months because sometimes connections who once were interactive with you do lose touch or interest.

This is easy when it comes to Facebook profiles. However, if you have a Facebook page hooked up to your Klout account, you will not want to remove fans too often unless they were being abusive. These fans will pop in and out and you don’t want to alienate them for not participating on your page. Some of the silent ones may end up using your services or buying your product a year later! All you can do is keep promoting your fan page, and keep putting out good and compelling content to attract new and interactive fans.

It is not so essential to remove fans on networks like Google or LinkedIn for this purpose. Facebook however, you will want to monitor your networks as it is still the most used platform over the others. Monitoring your Twitter account is also very essential. However, I will talk more about that in an upcoming blog post.

Do not only remain active on your networks, however, monitor your connections, especially on Facebook for now. If some are taking up space, decide if they are worth keeping or if not, then just delete.