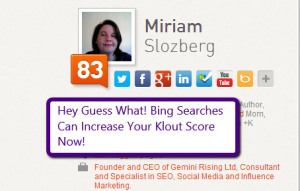 As you are aware, Bing and Klout formed a partnership last September. Now they are really cooking something up. Bing searches are now starting to contribute to the Klout score. What does this mean? The amount of times someone searches for you on Bing will have an impact on your Klout score.

Back in August 2012, Klout went through a major algorithm change, and started including Wikipedia pages to contribute to the score. The purpose was for Klout to start having offline factors count towards the score. Now Bing searches are contributing to the score, and offline influence is having a larger impact which helps Klout’s credibility. Because of this, at least Warren Buffet has a Klout score of 88 which is accurate considering how influential he is, as opposed as to what it used to be- which was 35.

Unfortunately while Klout is undergoing through major changes and testing new methods to have an effect on the score, some people may have been effected by having unexplained dropping scores. Once they are done with the testing phase, the issues with these scores should be fixed.

Klout also just joined up with Microsoft’s Yammer, which is allowing users to post their Klout scores and companies and organizations to find top contributors based on their Yammer participation.

Also, recently Klout released an Expert’s section for users to share their advice and expertise by answering questions. Answers with the most endorsements and shares will likely be featured on Bing search results. The purpose of this was not just for measuring influence. It was to give people an opportunity to share their knowledge across the net.

Klout again may not be a “perfect” measure of influence, however it has come a long, long way. They are going through growing pains, and will for a while. However, they are going to in the end be great! I like what they are doing!